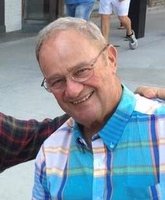 On Saturday March 7th James Francis Castelli Sr. loving husband of Diana and father to James and Sharon passed away peacefully with his family by his side. Jim was born June 22nd, 1940 to Charles ‘Cal’ and Eulah Castelli and shared a wonderful childhood with his predeceased brothers and sisters Charles, Virginia ‘Kiki’ and Margaret. Jim leaves behind his son Jim and wife Trish, daughter Sharon and wife Michelle, his grandchildren who were the light of his life, Emma Urbina and husband Michael, Katie Daspit and husband Stephen and Michael Castelli. He also has two great grandchildren Marlen and Enzo, and a future great granddaughter Harper. In addition to his immediate family, he also leaves behind several nieces and nephews. Jim graduated from Valley Regional High School in 1958; in 1961 he married his one true love Diana and they started their life journey. During that period, both he and Diana spent many hardworking years running Liberty Bus Lines in the Shoreline area. Jim was a founding member and President of the Connecticut School Transportation Association (COSTA). Jim also was a member of the Westbrook Elks and the Knights of Columbus. Once they retired in 1988, they spent the next three decades living their summers in Rhode Island and winters in Florida. In 1990, with the arrival of his first grandchild, he became affectionately known as VaVa. His favorite passion was spending time with his family. He loved fishing, boating, teaching the kids to clam, spending time in Marlow and watching the Red Sox win while eating a good hot dog! Jim's funeral services will be announced at a future date. In lieu of flowers the family has asked to consider a donation to the Chrysalis Center in Hartford - 255 Homestead Avenue, Hartford, CT 06112.