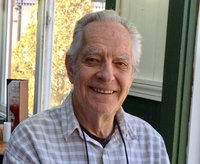 They met at a little league baseball game in 1966 and 18 months later tied the knot. It was the strength of Norman’s love for Charlene that would have him look beyond the challenges most men would walk away from. Just 37 years old and he was signing up for being the only father figure Charlene’s 4 children ages 6-12 had known. The coming decade would be hard parenting adolescent children, one of whom is hearing impaired. Norman Wilcox, a Connecticut Yankee with family roots in Old Saybrook, would be undaunted by the task ahead. Charlene and her California born children, living in Connecticut (David Wilcox of Chester, Vicki Wilcox of Middletown, Dan Wilcox of Essex, and Don Wilcox of Chester) called him their hero until the day he died. Charlene and Norman’s love for one another came easy but they both worked extremely hard at catching up on the American dream. They lived in Deep River for the last 45 years and Charlene worked at Saybrook Convalescent Hospital as a CNA for 35 years. Charlene was recognized for her devotion to her patients and loyalty to coworkers. She never let a blizzard, hurricane or any other form of natural disaster keep her from showing up for her job and the people that depended on her. Her passions were her family and she loved hosting holidays, baking for family and friends, gardening and pressing flowers which she would turn into beautiful greeting cards. Norman, after graduating from OSHS class of ’48, worked as a greenskeeper in Fenwick along with spinning discs at WLIS before entering the Air Force as an Entertainment Specialist during the Korean War. After the service he worked as a cable lineman in the US Virgin Islands and Carlsbad, NM. A terrible fall would send him back into radio, working at local stations WSUB and WTYD. He had a face for TV and so accepted an opportunity in Tucson at KOLD TV as a nightly news reporter along with hosting the morning radio talk show. Job opportunities brought the family back to Connecticut in the early 70’s. Energetic, smart, and up for a new challenge, Norman never stopped reinventing himself and held positions as a Friendly’s restaurant manager, Technical Illustrator, and Millstone (and Pinkerton) security. His last position before he finally retired was at Whelen Engineering which he derived a great deal of satisfaction. Norman was a past member of the OSFD and Masonic Lodge # 32. The past 2 years Norman and Charlene lived at Kirtland Commons in Deep River and made many friends. In February they moved into Apple Rehab Saybrook. Shortly after arrival the fear of the COVID 19 virus would have the facility mandate all residents remain in isolation. Norman and Charlene died within 4 days of each other. Charlene held Norman’s hand, which was her wish to be there for him, as he had been for her and her children “until death do us part”. In addition to their 4 children they leave behind daughter in law Cynthia E. (Wielgosz) Wilcox, granddaughter Danielle (Dee) Wilcox and her partner Andrew James (AJ) Harriger of East Hampton, CT and granddaughter Stephanie and husband Christopher Monette of West Brookfield, MA and six great grandchildren. Memorial contributions may be made in their names to the Connecticut Humane Society, 701 Russell Rd., Newington, CT 06111. To share a memory of them or send a condolence to the family please visit www.rwwfh.com Arrangements by the Robinson, Wright & Weymer Funeral Home in Centerbrook. A private ceremony will take place at White Brook Cemetery in Richmond, Rhode Island at a later date.