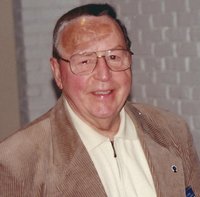 Samuel B. Walker, 93, passed away peacefully at home on August 4, 2020, after a long illness. He leaves behind his wife, Calice Sterling, and her daughters Kathy and Heather. He also leaves behind his two daughters, Susan and Kathy from his previous marriage. Sam also leaves behind 5 grandchildren and 4 great-grandchildren. He was predeceased by his child Elizabeth and his grandson Sean, as well as his first wife Lois. Sam was born in Portland, Maine on October 15, 1926, to Samuel Lenox and Alice Westhaver Walker. Upon graduating from high school in 1944, he enlisted in the United States Army Corps Reserve, and was on active duty as an IBM Tabulating Machine Specialist. Upon discharge from military service, he returned to Maine and began his career in data processing. Seeking to advance his career opportunity, he went to work for Cheesebrough-Pond’s in Clinton, Connecticut in 1959 as assistant manager of the Machine Accounting Department, the forerunner to today’s data processing, where he worked on the installation of the company’s first IBM computer which, at that time was only the fifth such machine installed in the state. In 1985 he was transferred to Cheesebrough-Pond’s Management Information Center in Trumbull, Connecticut, where he retired in 1992 as a senior applications coordinator. Sam’s religious training began in the Episcopal Church in Portland, Maine. He was a member of the vestry, taught Sunday School, and served as a lay reader. He continued his church work in Connecticut, and was a member of All Saints’ Episcopal Church in Ivoryton, Connecticut. Music has also played an important role in Sam’s life He played trombone for a short time with the Portland, Main Symphony Orchestra, and a big band dance band, on occasion, on the pier at Old Orchard Beach during the 40’s. Later Sam Played with the Old Lyme Town Band, as well as with the Manston Big Band, in Connecticut. Apart from family, Sam was an active member of the Masons, serving as Worshipful Master in 1972. He went on to be appointed Worshipful District Deputy of Masonic District 7B in 1975. As often as he had the chance, Sam could be found on the golf course. Calice would like to thank the special people of Middlesex Hospice {you know who you are} for their kindness and compassion, as well as the Lower Valley Care Advocates. A memorial service will be private. Funeral arrangements are being handled by Robinson, Wright & Weymer of Centerbrook, Connecticut. In memory of Sam, donations may be made to All Saints’ Episcopal Church in Ivoryton, Connecticut, or a favorite charity. A Memorial Service is scheduled for Monday, August 10, at 10AM at the Robinson, Wright & Weymer Funeral Home, 34 Main Street, in Centerbrook. Mr. Walker’s services will be conducted outside in observance of social distancing precautions.