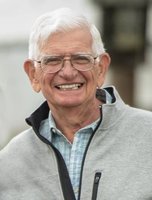 On August 21, 1937 a new soul came into this world, born Robert Alfonse Florio. He was the only child of proud parents, Katherine and Hugo who raised him in the Fort Schuyler area of the Bronx. Growing up in World War II era New York, the tone would be set for Bob’s life, one of resilience, fortitude, gratitude, compassion and duty. He graduated from Mount Saint Michael High School in 1955, followed by matriculating at Saint John’s University in 1959 where he would become a lifelong athlete and advocate of the sport of rowing. As a 60 year member of the New York Athletic Club, he would soundly guide his own 5 children to national and Olympic prominence, and mentor countless rowers to pursue athletic excellence and to give one’s all, a legacy that would be of great pride to him. Bob spent 5 years of honorable service in the Military Police of the US ARMY. His credence of character was duly noted while at Fort Bragg in South Carolina, “That your creative thinking and willingness to work long and hard hours was an outstanding display of unselfish work, devotion to duty.” To add to his notable lifetime tenures, Bob was a specialist on the American Stock Exchange for over 45 years working at times during his career alongside his father and his children. He was the AMEX’s chairman of Fleet Week, a reflection of his duty to country and love of the sea. He would see Wall Street evolve from the days of paper ticker tape to the digital age. Covered in the soot of 9/11, Bob would watch the towers fall in front of him and then muster the strength to return and become a beacon of strength and compassion to his many colleagues. Behind it all, the glue that made the Florio Family five children strong, and 13 grandchildren stronger, was a marital love story of 59 years of extraordinary devotion between Bob and his beloved wife, Gail. Together, nothing was impossible and they lived out their dream surrounded by the enduring love of a large family. They would raise their family in Rye, New York and retire to Essex, CT. Because of his love for people, his circle of friendship proliferated throughout his lifetime. This combined with his ubiquitous role of family patriarch has left a huge gap in the hearts of many as he completed his life’s final chapter on Thursday, August 6, 2020, just a month shy of his 84th birthday. His children: Robert Jr., Scott, Michael, Glenn and Jennifer are forever grateful for the love and guidance he bestowed upon them. His thirteen grand-children: William, Walter, Annika, Aislinn, Kate, Glenn Jr, Carlyn, Peter, Trace, Cooper, Molly, Hadley and Tillie, know the beauty of a life well-lived through his exemplary precedent full of notable good deeds. He wove his kindness through all who needed him, and asked for nothing in return but to be the very best versions of themselves. An unabashed joy of life was his to share, readily found in his easy smile. While having three generations seated at the holiday table, he had his best platform to retell his well-embellished and well-loved stories. He lived in many a “castle” over his lifetime, a man of exquisite taste in homes who especially loved medieval history and decor. He loved boxing and lifting weights. He was a car and arts enthusiast and enjoyed wood-crafting. He also loved a good read, eliciting his youthful “last call” by finishing the Harry Potter series just one month ago. Little sums up the measure of the man better than the names he bestowed on his boats over his lifetime: “Fidelity”, “Defender” and “My Gail”, not only defined his character, but simply stated the things that truly mattered most to him. He gave us love, commitment and irrefutable influence, something the world needs more than ever. Bob you are forever in our hearts. Thank you for your beautiful life. A funeral mass for Bob will be held on Friday, August 21 at 11am at Church of the Resurrection, Rye, New York. To share a memory or express a condolence to Robert’s family, please visit: www.rwwfh.com. Arrangements are by the Robinson, Wright & Weymer Funeral Home, in Centerbrook, CT.