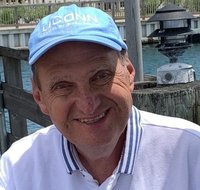 George Robert (“Bob”) Wisner, 78, of Deep River passed away on August 22nd after a sudden illness. Bob was born on January 15, 1942 in Hartford, Connecticut where he lived throughout his childhood. He received his bachelor’s degree in electrical engineering from the University of Connecticut in 1967. Bob was recognized at a young age for his bright mind and passion for engineering. In 1959, as a high school student, he won the Connecticut Science Fair for an automatic braille reader he had invented. This accomplishment became a pivotal moment in Bob’s life. Because of the Fair, he was offered an internship at the United Technologies Research Center. Bob then spent his entire 39-year career as a loyal employee of United Technologies: 32 years at the Research Center and the final four years in the Otis Elevator division. He retired in 1999 at age 57. Bob received numerous honors and awards throughout his career, and was awarded 14 U.S. patents. His early career focused on electro-optics and laser technologies; his later research focused on motor drives and elevators. He was especially proud of his work developing tracking systems for analyzing the gait of children with cerebral palsy. Throughout his career, he supervised dozens of engineers and was well-respected both as a scientist and as a manager. Bob spent his life giving back to the scientific community. For more than forty years, he volunteered with the Connecticut Science and Engineering Fair, a program that more than 650 middle and high school students participate in each year and is run entirely by dedicated volunteers. Bob directed this program with unwavering enthusiasm. Over the years, he mentored dozens of Fair students. He was especially enthusiastic about encouraging young women to enter science and engineering. His prior mentees have often reached out to him years later, thanking him for his support. We can only imagine how many lives and careers he helped shape. Most importantly, Bob was a dedicated family man. He married Susanne Gralton on August 28, 1965, and they were days away from celebrating their 55th anniversary at the time of his passing. Sue and Bob moved to Deep River in 1967 where they raised three children: Scott Wisner of Deep River, Cristen (Wisner) Whittaker of Wilmington, DE, and Jennifer Wisner Kelly of Concord, MA. The Wisner family spent weeks every summer on their sailboat, the Bittersweet, cruising Long Island Sound. Bob loved sailing, beachcombing, and exploring islands and coastal towns. In his retirement, Bob and Sue were active members of the North Cove Yacht Club in Old Saybrook. Bob also leaves behind five adored grandchildren: Maggie and Hannah Wisner, Ben and Claire Kelly, and Sydney Whittaker. He was so proud of each of their talents and accomplishments. After retirement, Bob and Sue spent 20 years exploring the world. They traveled far and wide including Antarctica, Alaska, and the fjords of Norway, as well as taking local trips to “leaf peep,” see shows in New York, or visit their children and grandchildren. Bob will be tremendously missed, but he leaves behind a legacy of love, dedication, and community service. He was, simply put, a very good man. His spirit will carry on in the hearts of the many lives he has touched. A private family service will be held. Memorial donations in Bob’s memory may be made to the Connecticut Science Fair, c/o Sandra Muller, President, 45 Coles Road, Cromwell, CT 06416, or email to president@ctsciencefair.org. To Share a memory or express a condolence to Bob’s family please visit: www.rwwfh.com. Arrangements are by the Robinson, Wright & Weymer Funeral Home, Centerbrook, CT.