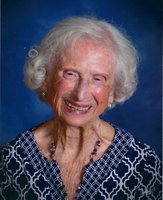 Mildred Anita Waligurski Essex, Connecticut – Mildred Anita Waligurski passed away peacefully on October 10th, 2020, at Essex Meadows where she had been a resident since 2004. Born on March 31, 1921 in Greeley CO, Anita was the first child of Robert Davis, then a college and seminary student, and Mildred McKinstry Davis. In 1928, the family moved to Farmington NM where her father became an Episcopal missionary to the Navajo Indians at the San Juan Mission. Anita attended high school at St. Katherine’s in Davenport Iowa. Following graduation, Anita enrolled in the University of Iowa where she met Lawrence (Larry) Kenyon. They were married in 1940. Larry made the Navy his career and Anita became a Navy officer’s wife. Duty assignments included Japan and Greece as well as many US locations. Larry died in 1970 after nearly 30 years of marriage. Anita went to work at the Naval Submarine Medical Research Laboratory in New London as the Administrative Assistant to the Scientific Director, a position she held for 13 years. In late 1972 Anita met Walter Waligurski of New London. They were married in 1973 and ultimately celebrated 39 years of marriage. In 1978 Anita enrolled in Connecticut College on a part time basis in order to complete her college education. In 1985 she completed her degree in religious studies and graduated Phi Beta Kappa with honors. Anita pushed herself to be all that she could be. “You have to exercise both your body and your mind”, she would say. Long walks and continued learning were cornerstones of her 99 years. She was an accomplished writer, having published numerous articles, short stories, and poems in local and regional publications. Also, she published two memoirs. Anita cared very much about family and friends and doing what she could to help others. Anita was predeceased by her first husband, Lawrence Kenyon; by her second husband, Walter Waligurski; and by her two sisters, Elizabeth Urquhart and Mary Davis. She is survived by her three sons and their spouses: Bruce and Barbara Kenyon of Charlotte, NC; Mike and Susan Kenyon of Stow, MA; and Tim and Virginia Kenyon of Boiling Springs, PA. She also is survived by eight grandchildren and eighteen great grandchildren. In lieu of flowers, donations may be made to St John’s Episcopal Church in Essex or the New London Soup Kitchen. Due to the pandemic, near term services will be private.